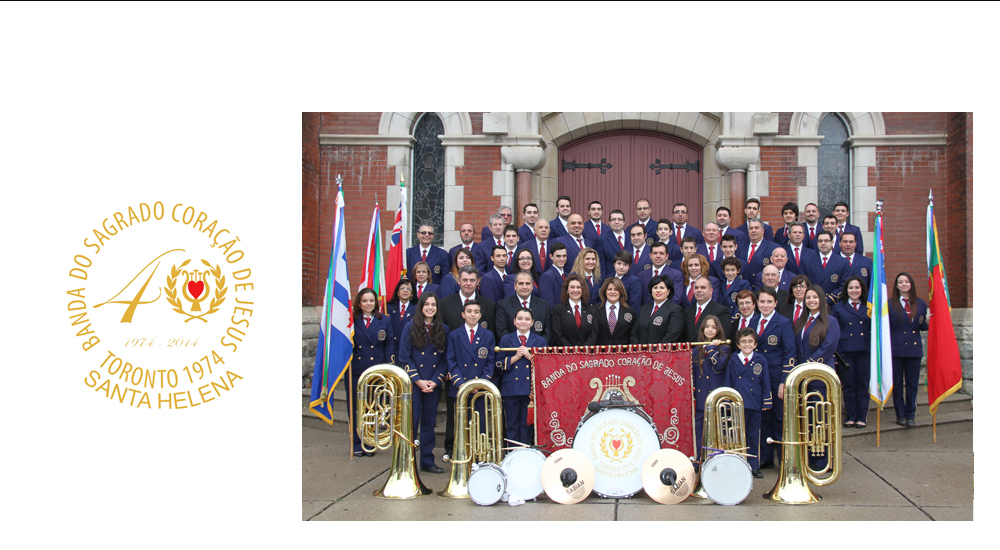 The Music Society of St. Helen's

The story of The Music Society of St. Helen’s is one of steady and substantial growth. In September 1974, a group of Portuguese music enthusiasts, all living in and around Santa Cruz Parish located in Toronto wished to continue their traditions and love of music. They formed the first directorship of the Banda do Sagrado Coração de Jesus. The band was comprised of 30 musicians, the first public appearance occurred while participating in the feast of the Holy Spirit at Santa Cruz in the spring of 1975. Today, the band is still fortunate to have active veterans, which include Mr. Alberto Moniz, and Mr. Joao Ferreira.

In 1978, the band left Santa Cruz Parish in order to make room for a school. The band was welcomed by the St. Helen’s Parish by Father Liborio Tavares, where we have been for the last 35 years since leaving Santa Cruz Parish and thankfully collaborate with Father João Cabral.

In July of 1983, the band was invited by Ms. Aideen Nicholson, Member of Parliament (under the leadership of then Prime Minister – Pierre Elliot Trudeau) to participate in the Canada Day Festivities. The band performed an open-air concert, beside the Federal Parliament Building in Ottawa under the directorship of Mr. Manuel Pires. In addition, the band has also participated is feasts of Senhor Santo Cristo in Montreal and in Kingston, Ontario.

The band’s first distant performance took place in Peabody, Massachusetts (USA) on July of 1983. The band would later return to the USA four more times to take part in the festival of the Holy Spirit in Fall River, Massachusetts. The band left North America for the first time and travelled to the St. Michael’s, Azores, Portugal in 1988. The band stayed in Ponta Delgada, to participate in many religious and civil events such as the Feast of Sr. Santo Cristo. Furthermore, the band performed in a reputable theatre, marched through the streets towards the military fort in São Braz. The military officials welcomed the band, and offered a memorable reception in the bands honour at city hall.

The band has become sophisticated and innovative in serving the Portuguese community. We are a proud member of ACAPO and actively contribute our services to all clubs and events within the ACAPO organization. Throughout our history our band has played for many notable dignitaries. Most recently our band played for Premiere Kathleen Wynne and Finance Minster Charles Sousa.

The Music Society of St. Helen’s has achieved three successful recordings since 1997. The last recording was released on Nov 17, 2002 at the 6th Annual Christmas Concert. With some of the sales of our last recording we were able to donate $1000 to The Children’s Aid Organization of Açores, a non-profit organization.

Our organization’s history included many contributions from conductors, musicians, past presidents, directors and volunteers. There are so many people to thank for all their hard work in the past. Some notable individuals to mention are Eddie Costa and Americo Rego who served as past presidents. Jose Manuel Resendes was a past conductor who served the organization from 1991 to 2010. Joao Soares, Artur Macedo and Sandro Melo also need to be commended for their work as conductors for our organization.

The current conductor Mr. Miguel Domingos has served our organization proudly for the last 2 years. Miguel has brought many years of music experience to our organization and has helped it grow to where it is today. Miguel’s hard work and dedication has helped produce many success stories with our youth band members.

The Music Society of St. Helen’s at present is an organization that incorporates both an orchestral band and a music school. The music school is offered free of charge to members of our community. The students are encouraged in a positive environment and are integrated into the orchestral band. The orchestral band members play an important role in the development of the new players with their strong commitment to community.

The Music Society of St. Helen’s/ Banda do Sagrado Coração de Jesus began with a dream and it has evolved into what is today because of its members. There have been many challenges throughout the years that have made us both stronger and more committed. We as an organization will always strive to bring the gift of music to everyone both in our Christian community and the community at large.